A local area network (LAN) consists interconnected computers in limited area e.g. in a home, in a building, etc. A LAN has multiple PCs, file servers, hubs, bridges, switches, routers, voice gateways, firewalls, and other devices required to form a LAN. These computers are getting connected with a cable. Purpose of this course is to provide an understanding on design and implementation of Local Area network, configuring network devices and to implement security in network. Security is one of the main aspects of any network, as data security is very important from an organization point of view. This course will help to learn router configuration, packet filter, troubleshooting network, test network performance & Ethernet connection etc. This course will also help to get the understanding of an IP address/pool management for a network.

LAN (Local Area Network) refers to the group of interconnected computers to facilitate communication and information exchange with each other. It also enables users to share resources such as printers, application programs, database etc. i.e. same resources can be used by multiple users in the network irrespective of the physical location of user or resource. There are many LAN technologies available which can help to improve network performance and can be used based on requirement. Primary areas where LAN can be used are Office, Hotels, Colleges, Schools, etc.

Figure 1: Diagram of LAN technologies
Different types of LAN technologies are described below:
1.1.1    Ethernet
Ethernet is a physical medium that is directly connected to Ethernet port of any networking devices. This is used in network to allow all the devices/host present in network to share same bandwidth. Ethernet is widely used LAN technology. Ethernet uses CSMA/CD (Carrier Sense Multiple Access/Collision Detection) protocols which help to share bandwidth evenly. As media is shared by all devices, there can be data collisions, it helps to detect collision. Each device in LAN contains separate collision domain and single broadcasting domain. There are two types of Ethernet mode available in market: half duplex & full duplex.
In half duplex data can transmit in both directions but in one direction at a time. Full duplex allows data transmission in both directions at same time i.e. there will be two medium to send and receive data. Ethernet can be of two type based on data transfer speed and distance.
a)    Fast Ethernet (802.3u): This type of Ethernet provides 100 mbps to 1 gigabit transmission speed and can support the distance up to 100 meter. This type of technology uses Cat-5 and Cat-6 cable.
b)    Gigabit Ethernet (802.ae): This ty 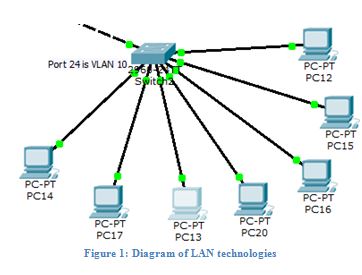 pe of Ethernet provides 1gbps to 10gbps transmission speed can support up to 40 km. This technology uses fiber optical cable.
(Seifert and Edwards, 2008)
Ethernet: Ethernet is a physical medium that is directly connected to PC Ethernet port of switch or networking device only one PC on a shared Ethernet segment can send a frame at one time, but all stations receive and look at the frame to determine if it is for them. the physical Ethernet specifications up to 100 Mbps.
Ethernet is the underlying basis for the technologies most widely used in LANs. In the 1980s and early 1990s, most networks used 10-Mbps Ethernet, defined initially by Digital, Intel, and Xerox (DIX Ethernet Version II) and later by the IEEE 802.3 working group.
The following are specifications for Ethernet, each of which is described in the following sections:

Fast Ethernet (100-Mbps)
IEEE introduced the IEEE 802.3u-1995 standard to provide Ethernet speeds of 100 Mbps over UTP and fiber cabling. The 100BASE-T standard is similar to 10-Mbps Ethernet in that it uses carrier sense multiple access collision detect (CSMA/CD), runs on Category (CAT) 3, 4, and 5 UTP cable; and preserves the frame formats. Connectivity still uses hubs, repeaters, and bridges. The following are specifications for Fast Ethernet, each of which is described in the following sections:

The following are the physical specifications for Gigabit Ethernet, each of which is described in the following sections:

(Lantronix.com, 2015)
1.1.2    VLANs (Virtual LAN)
VLAN is virtual network that allows sharing of network resources even hosts is located in different segments of network. So in VLAN, we uses same network as a different network without having different network devices. It helps to expand the network and provide more security in network. Every packet that is broadcasted from network can be seen by other network devices in the flat network i.e. there is no security in data transmission. VLANs help in achieving the security by hiding this information. Below are the list of features supported by VLAN:
•    We can add, move or change VLANs by making configurations e.g. in this scenario we have to create separate VLANs for finance department so that no other users from other department can access furnace data.
•    A separate VLAN can be created for a group of users where more secure access is required. Only the allowed users will be able to communicate in same VLAN and no other user from different VLAN will be allowed to communicate with this VLAN.
•    As users are grouped logically based on their functions, VLANs can also be created in same manner irrespective of physical location of users.
•    VLANs help to enhance network security.