The origin of any image including digital image is the photographs and artworks. Normally a digital image can be created by a digital camera effortlessly. Analogue formats can also be converted into digital by a scanner or any other devices similar to that. All digital cameras use CCD (Couple Charge Device) to capture the images and save them in a memory card or the camera’s internal memory. The light passes through the camera’s lens and the aperture forming an image. On the other hand, analogue form of images like photographs, photographic films and printed paper are initially scanned and then the scanned copy is refurbished using dynamic imagining technique. Now-a-days, mobile phones come with camera due to the development in technology which can also be used as a source to digital images. Digital images that are to be made are developed with two sources namely; primary and secondary sources (Rafael and Gonzalez, 2005). The final rendering will be a digital image with the sources in it.
Primary Source:Primary sources are nothing but the first-hand art work or object or a person. Here talking about digital imaging, the primary source would be the initial/chief image/point of image supply. Few of the sources that can be considered primary are;

The mentioned sources are common examples and sometimes only few are in terms of digital imaging.
Secondary Source:The source that doesn’t have an adjacency to the immediate record is secondary source. These are also considered as sources but they lack originality. Secondary sources are formed by taking surveys, getting comments and analysis, interpreting journals and book reviews.
An example is given below to know the difference between primary and secondary sources.

Abstract
Images in digital formats are created using capturing devices and by developing using primary and secondary sources. Here the explanation of how a fantasy art is rendered using Metadata is explained.
How to create a digital image for a specific purpose?
Before starting the work, the purpose is to be identified. In this assignment task fantasy illustration is given and hence fantasy art is goal. The word fantasy means imagination or dream and hence for creating a fantasy art, the right kind of imagination is needed. If drawing with imagination as source is not possible, the right kind of images should be mixed to produce a fantasy level image (Trushel and Vrhel, 2008).

How to look for sources?
Once the purpose is known 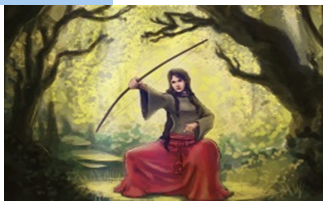 , the sources are searched and the image is developed accordingly. Here either multiple images or imagination can be the source of the image.
FANTASY ILLUSTRATION 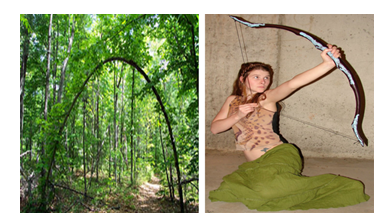 The completed digital image presented was made using a 2D bitmap image editor ‘Photoshop’ by Adobe Creative Suites. Initially by looking at the woods picture, an imaginary jungle was drawn with quite some details.
The woods background

Image processing can be consider 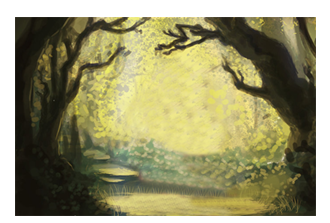 ed as a transformation of a particular image into an enhanced image. Its definition states that it is the analysis and manipulation of an image just to improve its quality. The fundamental steps of image processing are; Image grabbing, pre-processing, segmentation, representation and feature extraction and finally recognition and interpretation (safaribooksonline, n.d).
Image grabbing is the primary step and a camera is used for this step. Let’s assume a mechanical company which produces components as an example. In order to detect defect, a camera is placed which clicks many images in a second. There are two types of camera called the monochrome which photographs in black and white/grey scale and a colour camera. Then these images of the components are subjected to digitization (Caroline, 2010). Next to this step is the pre-processing step which has to enhance the image so that there are higher possibilities of success in the steps that are to come. Enhancing brightness/contrast, removing noise in the image, isolating interest objects in the image etc. are few examples of what will happen during pre-processing. Once pre-processing is done, the image is segmented. Segmentation is the process of extracting the border of interest objects from background. Feature extraction is the next step that follows which selects the important characteristics of an object in the image (Rafael and Gonzalez, 2005). The final process is the recognition process which will label the image with the information provided by the feature extraction.

Most of these data are recorded in the metadata end. Metadata gives the framework for any research data by providing explanatory details about it. Metadata is for almost all files that can be saved (Trushel and Vrhel, 2008). Metadata for photographs gives a detail about the person who owns it, the copyright, contact information, the camera with which the image was captured and it’s settings, compression type, date and time and quality of the image. An example of a metadata is given below. 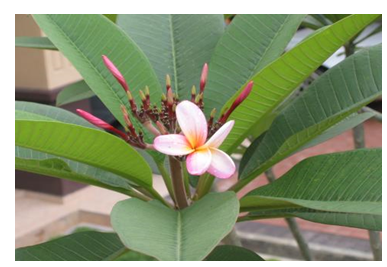 METADATA OF THE EXAMPLE PICTURE

3.1 Use of software tools to manipulate digital images 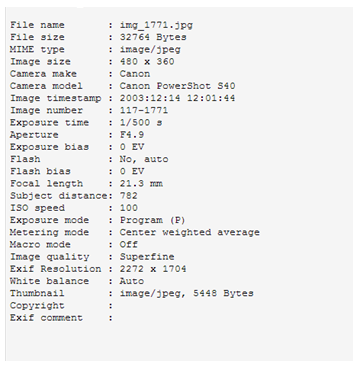 This Unit 37 Digital Image Creation & Development Sample Assignment is solely for reference and understanding purpose. Order now for complete copy of this assignment