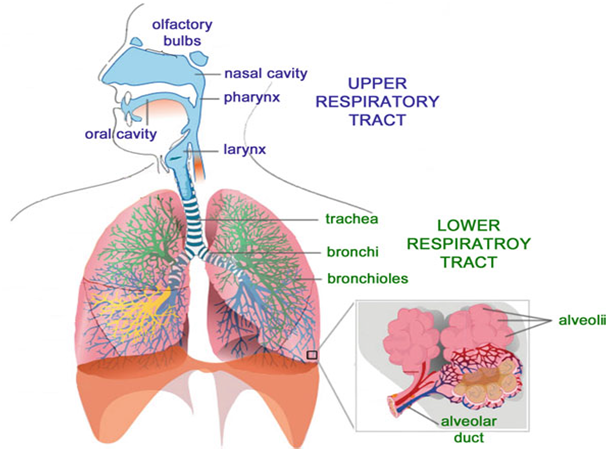 The human body is made up of various systems that work in close coordination to maintain homeostasis and normal body function (Inthavong & Ahmadi 2013). Such systems include the digestive system, the respiratory system, the circulatory system, the lymphatic system, endocrine system, and etcetera.  The coordination between these systems is vital for normal body function to maintain a stable or constant internal body environment is vital for survival. This paper gives a detailed report on laboratory experiments that were carried out to investigate the relationship between heart rate, air flow and temperature during exercise. Therefore, the functions of the respiratory and circulatory systems during exercise will be discussed.

The nose is the external opening of the respiratory system through which oxygenated air leaves the body and deoxygenated air leaves.  The nasal cavity is lined with a mucous membrane and hairs. These trap dust particles in the inhaled air, preventing them from the internal organs of the respiratory system where they would cause damage. As the air passes over the nasal cavity, it is warmed and moistened. In addition to these functions, the lining of the nasal cavity is made up of cells that are sensitive to smell.

The pharynx, otherwise known as the throat is a muscular funnel through which air passes during inhalation and exhalation. It contains the epiglottis, a flap of cartilage, which covers the opening of the trachea when food is being swallowed to prevent it from getting into the trachea and subsequently the lungs.

The larynx is also known as the voice box.  It connects the laryngopharynx to the trachea. It is made up of numerous pieces of cartilage which form the vocal chords. These vibrate as air passes over them during speech to produce sound (West 2011).

This is a cartilaginous tubule, otherwise known as the windpipe, through which air moving in and out of the lungs passes (Johnson 2012). It is made of C-shaped cartilages which are ciliated on the inside. It connects the larynx to the bronchi. The cartilages prevent it from collapsing. The ciliated inner lining consists of an epithelial lining, whose cells produce mucus that, together with the cilia, traps dust particles. The streaming movement of the cilia pushes the particles trapped in mucus towards the pharynx where it is expelled through coughing or is swallowed.

The trachea splits into two bronchi, each of them leading into either the left or right lobes of the lungs. The bronchi further divide into numerous bronchioles which terminate in alveolar sacs.

These are spongy organs found in the chest, above the diaphragm. They are covered by a pleural membrane on the outside. The left lung is smaller and consists of two lobes while the right is bigger and has three lobes (Johnson 2012). The lungs contain billions of alveoli (air sacs) which are covered by networks of capillaries. Gaseous exchange in the lungs takes place across the alveolar membranes through diffusion.