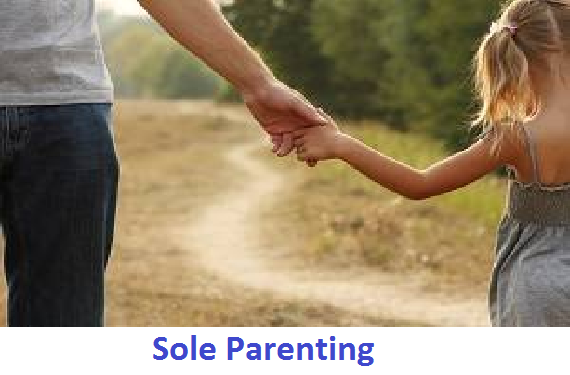 Sole-parent family structure is significant and ever increasing in their rates compared to last few years. Families headed by a sole parent represented more than one fifth of the families with children under the age of 15 years. The trend of family structure is assumed to be increased in the near future. The term we use to call them can directly affect the well-being of these parents and the children of these families. The terminology like “single parent” or “independent” could have positive impact upon a sole parent’s emotional well-being. It makes them feel empowered and strong to give their child an ideal future without any support independently. Positive terminology could help them to embrace their situation in a strong way and make most of it by focusing on the positive aspects of their situation. On the other hand addressing them in a negative terminology like “broken family” or “disadvantaged” family could weaken their mental strength. Though Australia is a modern country with almost all improved laws and facilities or subsidies still there are lots of parents who are suffering economically and handling social abuse. Many of them are unaware of the advantages they could get from the government. The ever increasing rate of solo parent family and its vulnerability is a matter of serious concern for the Australian Government.

Safety, Security and Adequate Standard of Living of a Sole Parent Family:

In today’s uncertain world life has become more risky and complex even for standard families in Australia. Maintaining a basic standard of living has become so difficult that almost in every family both the parents are working for meeting their necessity and comfort level for their family. In such a critical situation sole parent families have to fight with their insecurities and fear. Both the single parent and the child suffer the same consequences of insecurity and unsafe circumstances. Even in Australia like country the lack of employment is the major cause of poverty and sole parent poverty is far less prevalent than it would have been without the range of improvements to the social security system.   The same parent has to handle the day to day needs of the child and also has to take care of the mental and emotional health of the child all alone. At the same time the sole parent has to take care of their personal physical and mental health by themselves. As a result the misbalance is natural and when a single person handles so many important aspects of life there will be always something or the other which will remain untouched or undone (Fryer, 2014).

The department of families and community service noted that sole parent families especially for the woman headed, the biggest paramount is to maintain an adequate standard of living for themselves and for their child. This opens the door for all other comforts which other children are enjoying with their joint families and this height has to be achieved by the sole parent alone themselves otherwise the child will start feeling inferior to the other children and could develop a low self -esteem attitude for themselves from their childhood. The resent research in Australia indicates that there is a significant improvement in the poverty rate experienced by the women who are the driver of single parent family primarily attributed to the improved position of sole parents.

Social and economic well -being is being considered to be most significant component of general well -being of a person. In Australian society sole parent families are arguably the most disadvantaged group. They are among the group of people who are dependent on the common wealth income support and sole parent families are majority households who are counted under poverty level in Australia.  All the families understandably have their own definition of economic well -being and their culture and education drive their social behavior and manners. In terms of Government policy responses sole parent families are predominantly headed by women who are the victims of domestic violence and gender related issues. So their normal social life is likely to be less expected because society looks down upon them as failures and tagged them as disadvantaged families. Apart from separation or divorce, sole parent families most commonly come out through the death or imprisonment of one parent or the birth of children from single mother also create sole parent families. All this circumstances are usually not acceptable in the society in open headedly. Welfare reformation is the simplistic assumption for sole parent families for resolving the economic issues they face. The women of single parent families are more likely involved in the part time jobs especially when they have young children. They split their time in between part time job and then evening time for their household responsibilities and children.

The Australian Institute of Family Studies summaries the key researches on the basic agenda behind ever increasing rate of single parent families. Among the lone parent families 84% of cases are single mothers. Death of a parent, divorce for domestic violence, religion issues are some of the major causes of separated solo parent families. Most of the single woman parents are the victims of violence and have to face social and personal disruption and often find themselves in dire financial circumstances. They have to struggle through the loss of support network from their family and friends which compound stress and isolation in them and her children. The open minded culture of Australia like country there are hardly partners who get along with each other for life time. Either father or mother has to face the world alone with their child if the other partner wants to separate and start their life with someone else. This modern freedom loving culture is highlighted the major cause of improvement in the statistics data of sole parent family.

Single parent families access to child care services including day care services or after school care services in government aided institutions where proper care and education and food is provided to the single parented children. The child care plan of the Australian government benefits subsidies around 70% of child care cost. But the current researches highlighted that increased subsidies have not kept pace with the increased fees of such child care institutions. So the women who are in the low income group still find it difficult to fill up the gap between the cost of care and the Child Care Benefit prohibitive (Campbell, 2016).

Sole parent have legal aid and rights to subsidies legal fees involved in court or divorce proceedings. By taking the help of legal aids they could also have positive impact on their economic well- being as they no longer have to suffer all the expenses of the child maintenance alone and the other parent will also share the required expenses for their children living with the residing parent. If the sole parent don’t access for legal helps then they have to work extra hours to meet their ends and economic welfare (Boromeo, 2016).

Counseling and Health Care of The Victim Parent and Child:

It has been noticed that migrant and refugee women who escape from violence with their child from their family and friends become vulnerable if they couldn’t access social security and adequate and affordable alternative housing. The implementations of government policy initiatives includes family income supplements, increases in social security pension, increases in allowances such as the extension of rent assistance to a wide range of low income single parent families and the introduction of child support system (Health Services and Business, 2016). The GP management plan allows parents to take the benefits of five free counseling sessions to overcome their vulnerability and provide their child a better bright future by not letting them get affected by their separation trauma. They not only counsel them but their child also and help them access better future plan for their financial and social welfare (Tobias, 2010).

Bulk billing system implemented by the Australian Government make the victims eligible for the bills to be directed to Medicare which either pay the entire bill of the individual or a high percentage is reducing the level of income taken away. The sole parent must access to this service. They have to educate themselves to take benefits of the rules and subsidies implemented for their well- being by the government (Robinson, 2009).

The ever raising cost of education system and standard life style have made it difficult for the single parents to give their child a standard bright future. They have low socio economic status in the fighting of legal cases in settling divorce, arranging custody, setting child support, dealing with abuses and lack of proper dependable and competent legal representative. Finding suitable and affordable alternative accommodation in Australia like country is another big challenge for the independent parent alone keeping in concern the daily shopping areas and school. The cost of convenience could capture maximum of their monthly income. So they have to consider all this points. Having no partner to share the responsibility of day to day duties including children especially if the child is very small then the solo partner get tired of taking care of everything alone and have to choose the least paid  work from home based jobs. As a result sleep deprivation and stress are common in single parents.

Sole parenting has become most common problem in Australia. In the waves of modernization many of the innocent lives are suffering and spending their life below poverty level. Even there are examples where individuals are adopting poor child to become a solo parent. But when it is forced to become a single parent either by violence or by the irresponsible behavior of any of the partner then it is unacceptable in any way. Family is the basic need of every single individual and togetherness makes everyone feel secure and safe (McGee, 2018). When a child is born and brought up in joint family he/she automatically develops a stronger and positive attitude in life compared to the child of a solo parent family who has spent his childhood in insecure environment and had seen their parents struggling and fighting (Kelly, 2016). Welfare reform is seeking to address a range of low income single parent family group initially through changes introduced as part of the Australians Working Together package. This plan will help the parents to build their skills and plan for their better future. The government should provide more incentives to the lone mothers as the 91.5% of the jobless single parent families are headed by females. Proper counseling and more medical subsidies could ease their way but the higher authorities have to think to win over this problem from roots. The value of family life has to be taught to the children to make our country and our world a peaceful place to live in (Sherman, 2017).