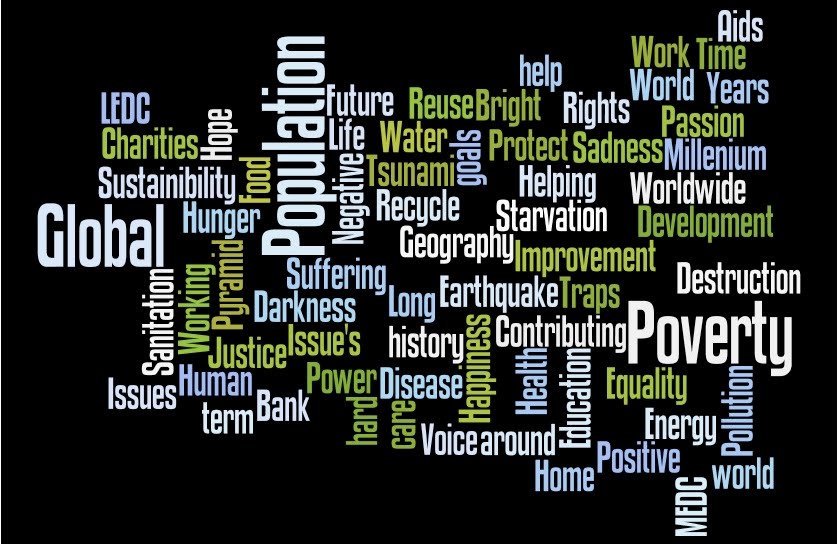 Poverty is a major global issue. According to Anup Shah (2014), about 815 million people of the total 7 billion world population all over the world live in poverty. Among this 35 million Americans (20 percent in America) contributing to nearly 14 percent of the total population live in poverty. Developing nations have 98 percent of undernourished people. Asia ranks the highest in the worst affected list in poverty. Other shocking facts include that women are the most affected contributing to 60 percent and among them 50 percent are pregnant women resulting in deaths. 3.1 million Children die (UNICEF report, 2014) annually due to poverty owing to malnutrition and premature births. This can be narrowed to a child death in every 10 seconds because of poverty. These statistics make poverty a global issue.

Poverty on the agenda

Poor people are the worst affected as a result of poverty. They are isolated from the society and have less or no voice and representation in political issues and debates. Most of the economic policies are benefiting the wealthier people. The amount spent by governments to combat poverty is relatively less compared to other programs like defense and industry development. This has put poverty on the agenda for many developing nations and is included as a major part of the annual budget.

Poverty in the News

Recently in BBC News, the causes of poverty are mainly from a farmer perspective committing suicides with families due to hunger. Poverty affects the underclass mostly working for minimum daily wages. A section of the middle class also comes under the poverty line. The global news covers the serious and ill effects of poverty on children and women. The pictures and videos of poverty struck children in African regions of Somalia by CNN and BBC is very mind disturbing. Child deaths and infant deaths get full media coverage. Poverty is felt all over the world, and there are poor people across the globe. The key affected poverty areas include the African and Asian nations (UNICEF report, 2014).

The news reports on undernourished children are more these days. An exclusive report on children raised in poverty conditions and their health are discussed in the media regularly. These children suffer from iron deficiency, impaired hearing, and blurred vision and brain problems (UNICEF report, 2014). Child abuse is high as a result of poverty in lower-class and middle-class families. Children are forced to beg and indulge in criminal activities as a result of poverty. The impact of poverty on children is huge, and the effects are worse.

I am a single mom and daily watch news channels showing women and children die of poverty. These pictures are very disturbing especially seeing the skeleton bodies of children living without food for days. As an average person, it is shocking and mind disturbing to see people die of hunger and commit suicides. I am more concerned about the pathetic situation of the single women and children. As a single mother, I know the difficulty of heading the entire family. I wonder the status of single mothers heading their families in the poverty struck parts of the world. Their lives are miserable. When I see the videos and hear the news about poverty-related deaths, it runs in my mind the whole day. I also have a child and think about the poor children living without food for days.

From a personal perspective, I have understood the importance of food. My child wastes much food in each meal. Now, I started saving food and never waste any food item. I donate the food remains of the day to beggars. In a professional manner, I think that economic status and employment plays a vital role in combating poverty. I think that the single mothers heading their families in poverty areas must be given regular employment. This ensures that the have enough money to bring their families and feed their children. I strongly feel that the condition of poor people will improve with regular employment and an improvement in their economic conditions.

WHO (World Health Organization) has framed Hunger project centers and micro finance program in Africa to effectively eradicate poverty in these areas. Hunger project centers aim is to develop water resources and agriculture through community development. This hunger project aims at water conservation, improved sanitation, developing agriculture and ensuring clean water. Micro finance programs are aimed at developing 1.4 billion women and children living in poverty in rural areas across the world (WHO report, 2013). World Health Organization has arranged this micro finance program to benefit farmers and agriculture as a whole as farmers are identified as the most affected by poverty.

A lot of social enterprises and NGOs like Banyan come to the aid of such homeless women and destitute widows (Sarah, 2012). Most of such women wander on the roads and are mentally affected. These women are sexually abused and become pregnant. These organizations give such women protection and shelter. They take care of them and try to cure their mental illness. These organizations have a good rapport with the police department to carry such welfare activities for women.

Governments of developing nations like India and China have developed the rural employment program. This program helps in getting guaranteed employment for 150 days every year. This program has successfully eliminated poverty in the rural areas with people getting employment and money (Anup Shah, 2014). IMF and World Bank encourage the nations and offer loans with easy repayment for addressing poverty issues.

The UN World Summit has proposed several declarations to overcome poverty in collaboration with member states. These declarations are aimed at reducing or eliminating the hunger deaths across the world. UNICEF has joined hands to reduce the number of child deaths as a result of poverty through the establishment of food banks in schools. This ensures that children get noon meal in schools regularly in the poverty affected areas.

WHO report. (2013). 11 Facts About Global Poverty. Available at https://www.dosomething.org/facts/11-facts-about-global-poverty

UNICEF report. (2014). Know your world: Facts about hunger and poverty. Available at http://thp.org/knowledge-center/know-your-world-facts-about-hunger-poverty/

Sarah. (2012). Causes and Effects of Poverty. Available at http://www.cliffsnotes.com/sciences/sociology/social-and-global-stratification/causes-and-effects-of-poverty