This is a solution of Law of Contract Assignment part 5 in which we discuss a brief analysis on the terms of the contracts, their meaning, effect and remedies. 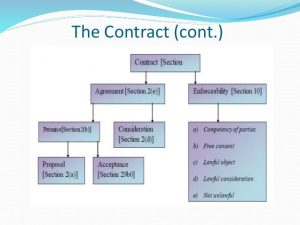 Now, when the law is applied to the facts, Faisal provided the details of his accountant while applying for a rented flat from Schneur. Schneur then applied to the accountant (Patricia) to gain information regarding the financial position of Faisal. In such situation, Patricia was a professional development and she is aware that Schneur is relying on her advice prior granting tenancy to Faisal. Thus, it is her duty to provide adequate care when furnishing any advice. On the contrary, Patricia did not comply with the standard of care that is required from her and she confuses Faisal with another client and does not bother to check the file properly. She replies to Schneur that Faisal is an excellent client with high income and capital and recommends him as a tenant. Rather, in reality, Faisal was continuously in overdraft and had been in serious debt with various banks on and off for several years.Thus, she did not perform with adequate duty of care and thus causes loss to Schneur. Thus, Patricia is negligent in her acts and is liable to compensate Schneur.
However, Patricia while furnishing advice incorporated a clause, that is, ‘this firm will not accept any liability for inaccuracy contained in this reference or any loss incurred as a consequence’. The clause is applicable only when the same is brought within the knowledge Schneur while furnishing advice.Thus, Schneur can sue Patricia under the law of negligence; however, Patricia can exclude her liability if she can prove that the exclusion clause was within the knowledge of Schneur.

Following statement is analysed in the present Task, ‘Provided the claimant establishes that he owed a duty of care, damages will be awarded for every loss suffered as a result of a negligent act’ The statement is critically evaluated.

Normally, under the law of negligence, whenever, a defendant is imposed with a duty of care which is not fulfilled by him and which causes loss to the claimant, then, such defendant is held to be liable under the law of negligence (Pearson 2016). Now, whether such claimant can sue the defendant for every loss that is suffered by him is the main question to be determined which is analysed with the help of relevant cases and references.

Normally, if a defendant is held negligent, then, the various forms of damages that can be attained are:
i.Special damages – Special damages means the damages which can be awarded to the claimant and which are calculated from the time when the defendant has indulged in a negligent act and extends to the time till the trial is proved by the court of law. These are the damages which may comprise of medical bills of the claimant (Lim Poh Choo v Camden and Islington Area Health Authority (1979), wages which are lost by the claimant because of the loss so suffered by him or the damage which are caused to his property because of the negligent actions of the defendant (Croke v Wiseman (1982). In British Transport Commission Gourley (1956) and Pickett British Rail Engineering Ltd (1980), the losses are considered as special damages which can be claimed by claimant. (BOL 2016)
ii.General Damages – The damages which cannot be calculated in monetary terms are called general damages. These are non- calculative because there is no receipt or invoice to support the same which is though available in special damages. Such damages include the suffering that is sustained by a claimant as a result out of pain or the suffering after the action of negligence by the defendant. In Wise v Kaye (1962) damages were awarded or pain and suffering, and are considered as general damages.
iii.Nominal damages – Nominal Damages means the damages which are not be able to be calculate by the court. This is because the loss so suffered by the plaintiff is very minimal and thus the court is not able to calculate such damages. In such situation, nominal damages are awarded.
iv.Punitive damages – Punitive damages means when instead of compensating the plaintiff, punishment is inflicted on the defendant. These damages can be recovered by the plaintiff only when he can sue that the acts of the defendant are more than mere negligence and in such cases punitive damages can also be imposed on the defendant.
v.Pure economic losses – These are the damages which arise out of the negligence of the defendant. Generally pure economic losses are no recoverable but the same can be recoverable wherein can be shown that the plaintiff and defendant are in special relationship and there exists a duty of care upon the defendant. In such situations pure economic assignment losses can also be granted to the plaintiff. Thus, in Spartan Steel & Alloys Ltd v Martin & Co Ltd (1973) pure economic losses were also awarded in cases of negligence. (BOL 2016)Thus, it is justified in submitted that in cases of negligence, the claimant seek to recover normally all kinds of losses that are suffered by him because of the negligent action of the defendant. The main advantages of grating such kinds of damages is that by granting damages the plaintiff is put back to the same position as if no loss is caused to him because of defendant. It acts as a deterrent effect on the defendant to carry out his actions in such manner so that no loss is caused to the plaintiff.

The present assignment thus covers significant areas of law, such as, the law of contracts, its meaning, its essentials, kinds of contracts, its impact, contractual terms, is meaning, impact and remedies, the law of negligence, its essentials, exclusion, etc. All the legal frameworks are very important and must be complied with in order to achieve the desired results.