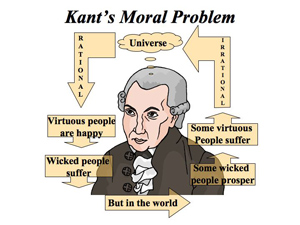 According to Kant, moral necessity is measured by the level of rationality. It is what he referred to as categorical imperative. Going against this categorical imperative is what constitutes immorality. Heroic actions of individuals may not necessarily be praiseworthy. An action by an individual may be accidental or forceful. Some of these acts may seem to praise morally worthy but in a real sense they may just be self-centered and may also be done with hidden intentions (Schroeder, 2005). According to Kant’s moral deontology, good will acts as the fundamental viewpoint of considering an act as either morally correct or not. Kant argues that, the notion of whether people should receive moral praise or not relies on the purpose for which they participate in a given action. If a person has some hidden goals that would only benefit him or her, or if a person does something out of coercion, then they are not justified to receive moral praise even if their deeds may be perceived as morally right. Doing an act for personal gains disqualifies one from getting moral praise since it is to an individual’s advantage and not a moral action. If anything is done for personal gains, it does not justify the need for moral praise (Hooker, 2002)..

Kant’s theory has however fallen short in explaining to a greater extent the concept of how human beings conduct themselves. The behaviour of a person may be influenced by the level of sympathy the person feels for another or the inner self-interest the person has, that is, moral conduct is supposed to be sympathetic in nature. However, Kant did not believe in sympathy as one of the reasons for moral action. Sympathy, just like any other feeling, cannot form the basis of morality as it is unreliable due to the fact that a person’s level of sympathy differs from person to person and depends on the situation. Schopenhauer argues that not having some degree of comfort leads to egoism that influences an individual’s actions in the case of categorical imperative. An individual’s well-being, Schopenhauer believes, is determined by his or her egoistic desire that is of uttermost importance to the individual. It can then be universalized and modified to fit the desire of others (Tsanoff, 1910).

When dealing with qualitative pleasures it is important to note the distinction between higher and lower pleasures. Engaging in activities without a lot of struggle results to individual desire (Mezes, 1895). Under Utilitarianism, moral acts are judged on the basis of the final impact it has on individuals, that is, whether it increases the pleasure or adds to the pain of the individuals. It is mainly concerned with the final results of an action and not its motives (Hooker, (2002). Qualitative utilitarians are of the opinion that there exist different kinds of pleasures and pains that are of greater quality and only physical. Qualitative utilitarian’s give value to both quality and quantity. On the other hand, quantitative utilitarian’s looks at mental pains as contrasting with physical pain concerning quantity only ( Donner, 2006).

Morally made decisions should always be by the categorical imperative. This helps in determining any actions that may be considered morally correct. According to Kant, for any act to be regarded as a moral law, it must be rational, impartial and universal which can be determined through the categorical. Kant was absolute with the two forms of categorical imperative being similar and that one could not go against the other. For Kant, it provided two different means of analyzing moral reality. This is because freedom is what handles an individual’s volubility with rationality being an essential requirement for freedom. Due to the universality of the reasoning of people coupled up with the existence of freedom, one should not treat other people as a means of obtaining their ends. The two forms of the categorical imperative, therefore, express a common notion that there exist acts that are collectively considered to be wrong.