Q1:In which of the following base systems is 123 not a valid number?

Answer: Base 3
Q2:.A NAND gate is called a universal logic element because

Answer: (b) any logic function can be realized by NAND gates alone

Q3: Most of the digital computers do not have floating point hardware because

(d) of no specific reason.

Q4: Positive logic in a logic circuit is one in which

Q5: Among the logic families, the family which can be used at very high frequency greater than 100 MHz in a 4 bitsynchronous counter is

Q6: SR Flip flop can be converted to T-type flip-flop if ?

(c) Both S and R are shortened.

(d) S and R are connected to Q and Q’ respectively

Answer: (d) S and R are connected to Q and Q’ respectively

(b) Set of paper tapes and cards put in a file

(d) Part of the auxiliary memory

Answer: (c) Temporary storage unit within the CPU having dedicated or general purpose use

Q8: For which of the following flip-flop the output clearly defined for all combinations of two inputs?

Q9: What is a digital-to-analog converter?

(a) It allows the use of cheaper analog techniques, which are always simpler.

(b) It takes the digital information from an audio CD and converts it to a usable form.

(d) It stores digital data on a hard drive.

(a) all inputs are LOW

(b) any input is HIGH

(d) All inputs are HIGH

Answer: (a) all inputs are LOW

Minterm- A minterm is a Boolean expression resulting in 1 for the output of a single cell, and 0s for all other cells in a Karnaugh map, or truth table.

Maxterm- A maxterm is a Boolean expression resulting in a 0 for the output of a single cell expression, and 1s for all other cells in the Karnaugh map, or truth table.

Q12: (a) Show how a full-adder can be converted to a full-subtractor with the addition of one inverted circuit.

All that has to be done is to put an inverter on the B input. Then tie the Cin input high to provide the “and then add one”.

Below is a full adder circuit. 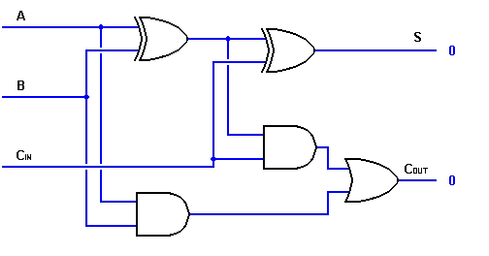 Full-subtractor with the addition of one inverted circuit. 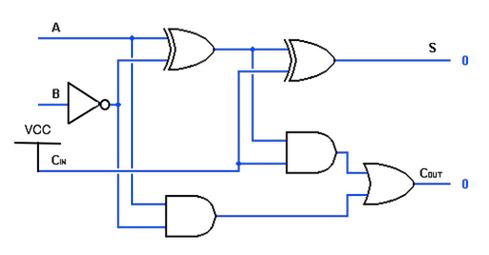 Q13: (a) Explain the different triggering techniques of flip-flops.

The high level triggering technique is used when a flip flop is needed to respond at its HIGH state. It is mostly identified from the straight lead from the clock input. 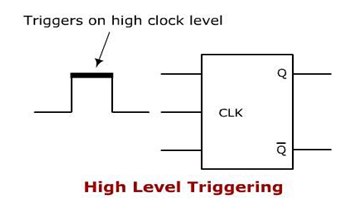 The low level triggering is used when a flip flop is required to respond at its LOW level. 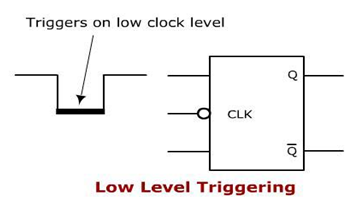 Positive edge triggering is used when a flip flop is required to respond at a LOW to HIGH transition state. 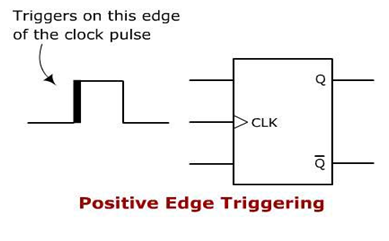 Negative edge triggering is used when a flip flop is required to respond during a HIGH to LOW transition state. 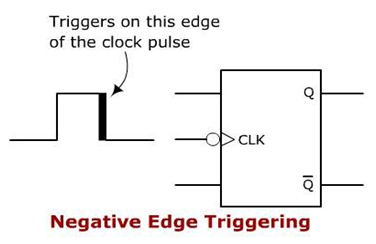 (b) Explain the working of a T flip flop.

The ‘toggle’ or T flip flop is a kind of flip flop that changes its output on every clock edge thereby giving an output of half the frequency of the signal to the T input. Below is how the characteristic table for a T flip flop looks like.

The first column consists of the value of T which is a control input. The second column comprises of the value of the current state which the current value is being output by Q. The third column (Q+) represents the next state. A T flip flop has two possible values .The first one is when T=0.At this value the flip flop does a hold which means that the output Q is the same as it was before the clock edge. The second possible value is when T=1.At this value, the flip flop does a toggle. This means that the output is negated after the clock edge. Therefore, in a T flip flop, the current state value for another cycle can be maintained or can be toggled (negated) at the next clock edge.

Q14: Discuss the following in detail:

Shift registers are registers capable of shifting binary information in one or both directions.  Shift registers consist of a series of flip flops cascaded together with the output of one flip flop connected to the input of the other flip flop.  All flip flops receive common clock pulses that initiate the shift from one stage to the next.  They are generally provided with a Clear or Reset connection so that they can be “SET” or “RESET” as required.  A shift register is controlled with certain clock pulses by inhibiting the clock from the input of the register if shift is not required.  A shift register is also able to provide extra circuits to control the shift operation through the D inputs of the flip flops rather than the clock input.

A Multiplexer is a combinational logic circuit or device that acts as a multiple-input and single output switch. There are different types of multiplexers. They include: wavelength division, frequency division and time division multiplexers. Multiplexers are applied in computer memory and telephone network 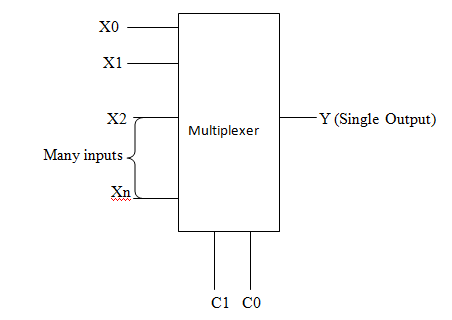 (b) Discuss the differences between combinational circuits and sequential circuits.

Q1. (a)Obtain the logic diagram of a master- slave J-K  flip flop with AND and NOR gates.

The number of flip flops required:

Q2. (a)What is mantissa and exponent? Give suitable example.

Mantissa is the decimal part of a logarithm. A suitable example is in the logarithm 1.556, the mantissa is 0.556.

Exponent shows the number of repeated multiplication to be carried out. It is usually written as a superscript. For example 5 exponent 3 means 53, implying 5*5*5

Minterm- A minterm is a Boolean expression resulting in 1 for the output of a single cell, and 0s for all other cells in a Karnaugh map, or truth table.

Maxterm- A maxterm is a Boolean expression resulting in a 0 for the output of a single cell expression, and 1s for all other cells in the Karnaugh map, or truth table.

A four bit binary parallel adder is a circuit, consisting of four full adders, which will add four-bit binary numbers.

(b) Give the block diagram of processor unit and explain the function of different blocks. 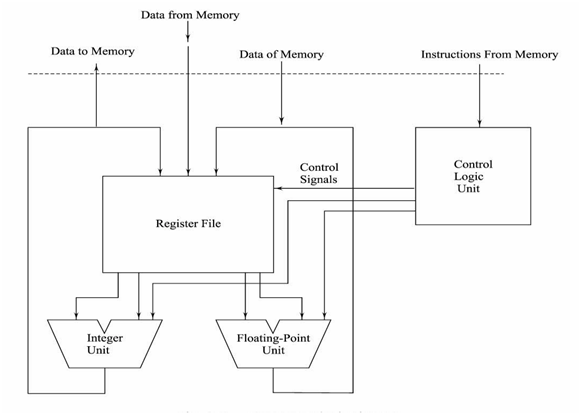 The execution unit consists of the arithmetic and logic unit (ALU).It is also made up of the hardware that fetches, decodes and executes instructions.

The register set allows an operation to read all inputs from the register file at the same time rather than having to read them one at a time.

The control logic determines when instructions can be executed. It also controls the sequences of operations required to execute each instruction.

Q1 State whether the following statements are true or false and justify your statement?

Since S2 is linear we know that

if they are connected in series, the z(t) = x(t) which is linear. Hence the interconnection of two non linear systems can be linear.

response whose maximum overshoot is 50% of its final value. If the final value is

1, determine a difference equation relating the input x[n] and output y[n] of this filter?

number of zeros. The signal x(t) is known to have an impulse at t = 0. Determine

what information, if any, this provides about the number of zeros and their locations?

Q4 Let x(t) be a signal that has a rational Laplace transform with exactly two poles,

Q6 Consider a feedback system, either in continous-time or discrete-time, and suppose that the Nyquist plot for the system passes throughthe point -1/K. Is the feedback system stable or unstable for this value of the gain? Explain your answer?

The feedback system is stable because the nyquist plot has circled the point (-1,0)

Q1 (A) WHICH IS THE FASTEST ADC AND WHY?

Flash ADC is the fastest because change in it takes place simultaneously but not sequentially.

Q2 (A) WHAT IS THE RANGE OF MODULATING INPUT VOLTAGE APPLIED TO A VCO?

(B) DRAW THE CIRCUIT OF A PLL AM DETECTOR AND EXPLAIN IT’S OPERATIONS.

Q3 (A) GIVE THE CONVERSATION TIME FOR 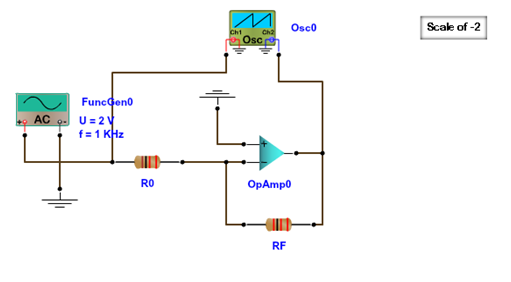 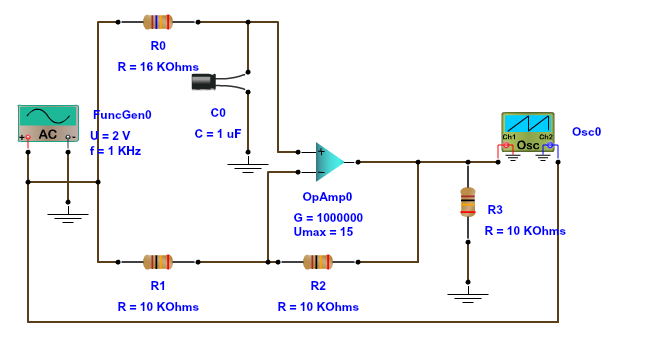 Q4 (A) WHAT ARE THE MODES OF OPERATIONS OF A TIMER?

The modes of operations of a Timer are: Astable mode, monostable mode and bistable mode.

An astable circuit has no stable state. The output of this mode continually switches state between low and high without an intervention from the user.

(B) WHAT IS THE PRINCIPLE SWITCH MODE POWER SUPPLIES?DISCUSS IT’S ADVANTAGES AND DISADVANTAGES.

Switch mode power supply is an electronic power supply that is integrated with the switching regulator for the purposes of converting the electrical power efficiently from one form to another with the desired characteristics. 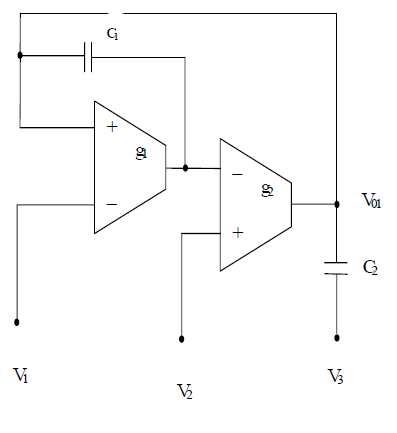 The realization conditions are

The realization conditions are

This square wave generator is like the Schmitt trigger circuit in that the reference voltage for the comparator action depends on the output voltage. 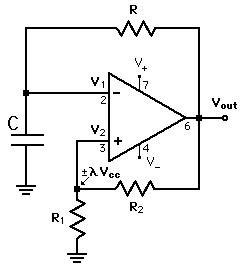 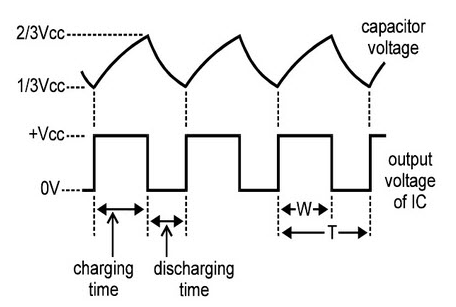 Q6 (A) LIST THE NON-IDEAL dc CHARACTERISTICS OF AN OP-AMP.

Bode Plot is a graphical representation of a linear, time-invariant system transfer function.

(C) WHAT ARE THE DIFFERENT LINEAR INTEGRATED CIRCUIT PACKAGES?

(D) NAME THE TECHNOLOGY USED FOR THE FABRICATION OF TRANSISTORS OR ICS.