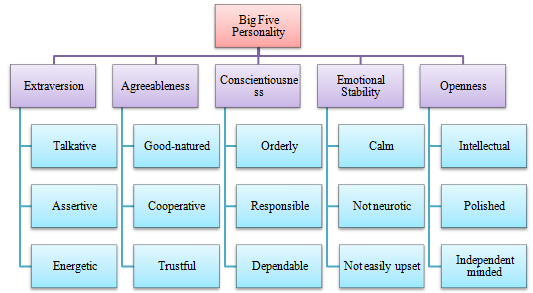 Schmitt.et.al. (2008) indicated that personality aspects has been conceptualized using variety of theories at different levels of abstraction. Even it has been seen that each of these level has got unique contribution of person understanding difference in individual behavior and experience. But there have been various personality traits and scales designed for measuring such aspect that escalates without an end in sight. In this regard it has been observed that there have been various researchers and practitioners in the area of personality assessment and have undergone bewildering array of personality scales that they are required to select. However, they also had little guidance and were not having any sort of rationale at their hand. Cobb-Clark and Schurer, (2012) indicates that after laying down decades of research this field is moving towards a consensus of general taxonomy concerning personality traits that is “Big Five” personality dimensions. It is a dimension which has not got the potential of a particular theoretical perspective. But have been derived out of analyses pertaining to natural language but were derived from analyses of the natural-language that is used by an individual for describing themselves and others. The Big five taxonomy has been serving an integrative function rather than replacing the earlier system. Even this system builds up a common framework for representing various diverse systems of personality description. Thus, this study has been undertaken in order to critically discuss the “BFI test and its utility to psychological and psychometric practice“. Even this report will be discussing regarding the chosen process/Instrument that has been used in this particular research. Further, discussion will be carried out concerning its utility to psychological and psychometric practice.

2. DISCOVERY OF THE BIG FIVE

There were various pioneering work laid down by Cattell’s and the availability of smaller list pertaining to variables. This has helped out investigators for carrying out research concerning dimensional structure of trait ratings. It has been seen that there were various researchers who looked after the dimension of big five for its appropriate discovery and clarification (Komarraju.et.al., 2009). In the period of 1949 Fiske came up with 22 very simple descriptions of Cattell’s variables. The structure of the factors have been derived out of ratings by self, peers and psychological staff members that were seen to be highly similar and resembled and in later period they were known to be Big Five. Further, clarification has been laid down by Tupes and Christal in 1961 laying down analysis by correlation matrices considering eight different samples. The samples were ranging from airmen who were seen to have high-school education to first-year graduate students (Soto.et.al., 2011). The rating in this regard has been laid down by peers, supervisors, teachers or experienced clinicians that were seen to be as diverse in the military training course. The analyses undertaken by Tupes and Christal indicated five strong and recurrent factors and there was no other consequence. Then in the period of 1981 structure of five factors has been showed by Digman and Takemoto-Chock that has been derived out of Cattell’s 35 variables. The factors identified were named to be as follows:

Eventually all these factors were known to be big five as a title chosen to reflect all these factors not for reflecting their intrinsic greatness but for laying down emphasize that every factor is seen to extremely broad. However, it cannot be said that Big Five structure of personality could only be reduced to the level of five traits (DeYoung.et.al., 2010). Rather, it could be said that these five dimensions represent personality of an individual at broadest level of abstraction. Even all these dimension lays down the summary of larger number of distinct as per specific personality characteristics.

3. TESTING THE BIG FIVE IN A COMPREHENSIVE SET

Since the period of 1980 it could be seen that there was increase in the research of big five and issues pertaining to personality structure. It has also been identified that there were numerous set of variables indicating big five factor structure. In the period of 1995 Block indicated that there are number of researches that have been influenced by the variables identified by Cattell’s selection of variables (Kim.et.al., 2009). It has been done in order to test its comprehensiveness and generality of the Big Five in a more comprehensive variable sets. In the year 1967 Norman laid down an exhaustive list of personality descriptive terms that have been sorted in 75 semantic categories and it has been done for updating Allport and Odbert list and reducing the steps of Cattell’s. Further, in the period of certain list has been laid down by Goldberg in order to clarify nature and composition of broad factors. Even it has been done for testing their stability and generalizability that could be seen around variations in methodology and data sources. Then in the period of 1990 Goldberg laid down an inventory of 1,710 trait adjectives that could be used by individuals for rating their own personality (Selfhout.et.al., 2010). Then Goldberg carries out the factor analysis process concerning Norman’s semantic categories laying down inter-correlation of self-rating data. In this respect it has been seen that first five factors indicated the Big Five and replicated throughout various methods relating to extraction and rotation of factors. Even it has been said by the author that first five factors were seen to remain virtually invariant than more than five were rotated.

It has been indicated that big five personality model is a useful framework for measuring personality of an individual and for organizing the personality. These five factors have been designed for providing short, flexible and to understand assessment in an easiest manner concerning five dimensions that lays down focus on five broad dimensions instead of individual facets (Giluk, 2009). Further, critical analysis showed that big five factor have been providing a descriptive taxonomy that lays down myriad natural-language and concepts of scientific trait in a single classificatory framework. But as similar to other scientific model the big also undergoes certain limitations. In the year 1994 Pervin argues about several critics indicating that big does not lay down a complete theory of personality. Even it has been seen that Big Five taxonomy was never seen to be a comprehensive personality theory. The development of this trait was to form a structural relation among various personality traits (Kim.et.al., 2009). Even it could be said as like of other structural models the big five system lays down personality that is seen to focus on descriptive rather than explanatory. It even lays down emphasizes on regularities concerning behaviour rather than focusing upon inferred dynamic and developmental processes. Further, it could also be said that it looks after variables rather than individuals or types of individuals. However, it could also be seen that this system provides a conceptual foundation in order to examine issues in the form of theories.

The invitation letter was mailed to the participant through e-mail and detailed about the personality test that they are required to undergo explaining purpose, procedure and research team of the study. Then after a week the interviewer approached the participant via telephone. After laying down a verbal consent a structure questionnaire has been administered.

For measuring the personality trait of an individual there has been an execution of big five inventory that consisted of 44 items that measured five trait dimensions of a personality. In this regard extraversion included 8 items, agreeableness 9 items, conscientiousness 9 items, emotional stability 8 items and openness with 10 items. These all 44 items were kept on the 5 point Likert scale from 1= strongly disagree to 5=strongly agree.

The data collected from the participant based upon 44 items of big five inventory was analyzed based upon a particular score. Every factor was composed of different variables and these specific variables falling in a particular factor was laid down with a score. Then after laying down the score it was totalled. The calculated total was divided with the factor total variables in order to derive the mean for the factor. Further, the highest mean identify indicates about the personality trait of the particular participant. On the other hand, lowest mean states that a very trait could be seen with respect to that factor among the participants personality trait.

From the analysis it has been identified that mean value was seen to be highest for the factor openness (3.7) among the big five personality trait of a respondent. From the findings it could be said that these are the individuals who have got the tendency of being imaginative, spontaneous and flexible. Even they are the persons who are seen to strong in discovering new experiences or new ways for doing particular things. However, they do not like established structure, routine, rule and solutions that focus upon doing things in a different manner. These individuals are having an intuitive thinking and are seen to be comfortable in a situation where the information is not complete (Komarraju.et.al., 2009). It has also been seen that such people feels their comfort in an ambiguous situations and adopts change in a quickly manner. It can also be said that openness is a general appreciation concerning art, emotion, curiosity, adventure, unusual ideas, imagination and variety of experience. Even such an individual has got a tendency to get change with newer thoughts, ideas and changes.

Further, analysis showed that 2 highest mean was seen to be with respect to factor Extraversion (3.375). This shows that with openness participant has also got some personality trait pertaining to extraversion. They are the individuals who are seen to be socially involved, highly energetic and assertive with a preference to be around people involved in some or the other activities.  Even it has been seen that person high being extraversion will be surrounded with individuals at their work and personal life. They are the individuals who have been enjoying their life socializing with other, talkative and communicative (Giluk, 2009). It could also be said that such people lays down an active existence, seek excitement and stimulation. The others will be considering such individual to be cheerful, upbeat and optimistic.

However, analysis also indicated that the lowest mean to be with respect to the factor Agreeableness (2.75). This shows participant will be having a lower tendency of being sympathetic, cooperative and considerate. The individual who is seen to have lower score in this factor will display lower level of sensitivity, compassion and understanding (Graziano and Tobin, 2009). Even this person will be seen to less pleasant and accommodating, compassionate and cooperative in social situations.

From the study it has been found that big five personality model is a useful framework for measuring personality of an individual and for organizing the personality. The big five personality is composed of five factors that are extraversion, agreeableness, conscientiousness, emotional stability and openness. Study also indicated participant to be openness and Extraversion as mean was highest in this factor. This shows individuals who have got the tendency of being imaginative, spontaneous and flexible. Even they are seen to be socially involved, highly energetic and assertive with a preference to be around people involved in some or the other activities. However, participant is seen to low in agreeableness indicating lower tendency of being sympathetic, cooperative and considerate.