“The First Date” commercial features an overprotected dad who allows his daughter to go on date with her boyfriend but wanted to be there with her daughter to make sure that she is doing fine. This was made possible by the “Car Finder” features of Hyundai Genesis. Comic Actor Kevin Hart has impressed the audience with his punch lines like “You are messing with the wrong dad” and a sense of humour is detected in a natural manner in the whole advertisement. Sense of humour element of the advertisement is the one which touches the heart of the audience

The Audi R 8 Commander commercial touches the heart of the audience in the manner it allows an astronaut to relive the past and feel the excitement of reaching the moon. An astronaut who has lost the will to live gets something to root in and start afresh while driving the Audi R 8 with speed limit of 207 mph. The main element of this ass is the way it connects the past of an astronaut with his present and an underlying message that “Choosing the moon brings out the best in us”, so choose Commander.

In its Super Bowl commercial, Jeep has used the photomontage of the people covering the 75 years of Jeep success. The statement – “I have lived millions of lives” and the acceptance of Jeep by the people who dared to do something different touches the sentiments of the audience. The piano music in the background lifts the spirit of the dialogues and the last statement – “We don’t make Jeep, you do” engages the audience and make them feel that they are the part of the Jeep’s 75 year journey.

The advertisement of Persil Pro Clean lacked the creativity and cinematography and only a plain statement by the anchor was the best they could deliver. Although, sometimes the very simple and easy to understand advertisements might create wonders but there was nothing in this add which could engage the audience. It seemed like announcing the result of a survey instead of an appeal to the audience. The commercial shows a less known celebrity Peter Hermann saying that Persil ProClean is the best which failed to convince the audience.

The only thing which impresses in this commercial is the celebrity Steven Tyler. Other than Steven Tyler, the commercial is an average advertisement. A portrait of Steven Tyler made of Skittles does not shows itself as an object of desire but only a negative effect is sensed by the manner portrait talks.

Same is the problem with tagline “”Rock the Rainbow Taste the Rainbow” and Hashtag #Skittles Art which fail to connect the audience with the product. Overall, the commercial fails to engage the audience.

Long, boring and unnecessary– that’s my view on this commercial. An animated beer dispenser’s conversation with a guy sitting in the bar is so long and confusing that the main idea behind the advertisement seems lost. If an advertisement is not able to engage the audience that what is the purpose of the advertisement at all. Company tries to put some innovation and creativity in the commercial which is a great thing to do but in the end, all that matters is the execution of the strategy where it failed. Even the tagline of the advertisement does not feel very relevant to the commercial and the product.

A scree shot of the Audi’s website is shown below:

The website of Audi is simple and sober without many colours and too much congestion. A simple logo of the company in the right upper corner makes the website look elegant. The website is designed in a way that it seems compatible with the Commander advertisement in the Super Bowl. “Choosing the moon” in the commercial and “Why the moon matters” complement each other. The user interface is simple and attracts the visitors.

The Facebook page of Audi is shown in the below picture: 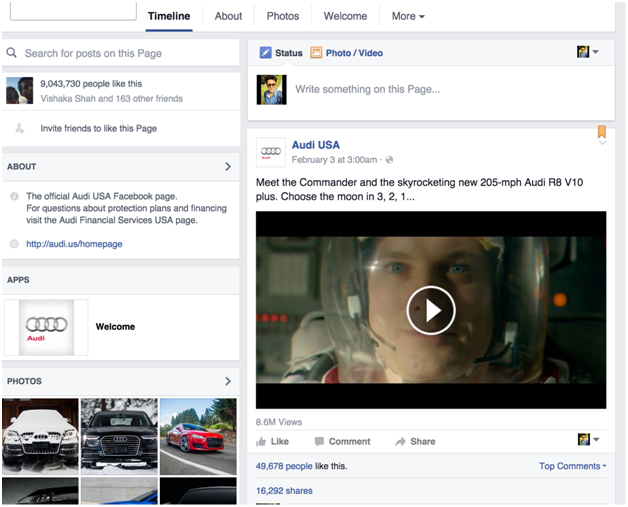 There is no doubt that Facebook has become the essential element of the marketing strategy of any company and Audi seems to taking up the task. The Facebook page of Audi has 9,043,730 likes which is a great figure. The “Commander” commercial of Audi R 8 has found its right place on the Facebook page of Audi. The gallery contains many great pictures of the company products and highlights there important features. Company keeps posting the new content on the page in the regular manner to give something new to the visitors every time they log in to the Facebook page of Audi.

Along with Facebook, Audi is also using Twitter as one of its main marketing platform. The Twitter page of Audi is shown in the below figure:

The Twitter handle of Audi shows 17.7K tweets, 13.1K following, 1.45M followers and 7,845 likes which shows that huge number of visitors hit to the twitter page of the company. There are 3,739 photos and videos are available in the Twitter handle of Audi to engage the visitors and market the best features of its products. The page gets at least 2 to 3 tweets on the regular basis.

Supermarket presence of the products

Supermarkets play an important role in the marketing strategy of the companies which seems more fruitful when a big event is organised like Super Bowl in the case. The positioning of the products at Safeway supermarket definitely helps the brands to get the attention of the customers. Rest of the work is done by the exciting discounts and offers on the brands. The positioning of PepsiCo and Coke shows how these companies are using the supermarkets Safeway to engage the customers and building the brand value.

Offers like buy one get one free and sales on the selected products gives these companies an edge against their competitors.

Abstract of the Articles

The article focuses on the controversial advertisements in the history of Super Bowl. The advertisement by PETA was rejected because of the sexual content and the tagline “Vegans last longer”. The advertisement shows that the vegetarians are better in the bed than the meat eating person which is not proved by any research. The commercial does not stop here and shows that a woman killing her partner as he was not able to satisfy her. Even many of the producers and companies know that their advertisement might be rejected but still they go for it as this also causes publicity which is the main purpose of the advertisement.

This article discusses the methods which could be used to make the advertisements memorable. The first thing it suggests is the use of animal and children in the commercials as they resonate with the audience. It is the use of animals and children which makes the advertisements timeless. Animals and children helps in engaging the viewers and they can touch the hearts of the people and make them remember the messages commercial wanted to convey. Advertisements like Budweiser’s “Puppy Love” (2015) and “Lost Dog” (2014) has proved the idea to be true.

The article discusses the top 10 advertisements shared from Super Bowl games. The highest number of shares goes to Volkswagen with 5.4 million shares. The article also provides the actual data on these commercials.